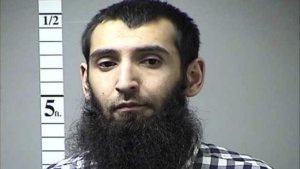 The man accused of carrying out a terrorist attack in New York City that left eight people dead reportedly has ties to Paterson, New Jersey. The suspect, 29-year-old Sayfullo Saipov (full name: Sayfullo Habibullaevic Saipov), is from Tampa, Florida but had been living in Paterson, New Jersey at the time of the deadly incident in NYC. On October 31, Saipov allegedly drove a rental truck down a bicycle path near the World Trade Center (WTC) in Lower Manhattan. Saipov reportedly entered the bike path on Houston Street, then headed south for several blocks. The truck struck dozens of people, resulting in eight deaths and at least 11 serious injuries. The vehicle eventually came to a stop after crashing into a school bus on Chambers Street, just a few blocks away from One World Trade Center.

After the collision with the school bus, Saipov got out of the pickup truck and tried to flee the scene on foot. According to witnesses, Saipov was carrying a pellet and paintball gun as he made a run for it. Additionally, law enforcement sources said that Saipov was yelling Allahu Akbar when he exited the truck. An NYPD officer happened to be nearby at the time and chased after Saipov. The police officer used his service weapon to shoot Saipov in the abdomen, ending the situation before any more damage could be caused.

The FBI s Joint Terrorism Task Force worked with local law enforcement agencies to investigate the violent crime. While searching at the site of the terroristic attack, authorities reportedly discovered a note indicating that Saipov carried out the deadly attack in the name of terroristic organization ISIS. Afterwards, New York City Mayor Bill de Blasio seemingly confirmed the findings of investigators by calling the deadly incident an act of terror, and a particularly cowardly act of terror.

Given the circumstances of the incident, it is likely that Saipov will face federal charges for terrorism, as well as first degree murder. It is also possible that he could be charged with weapons offenses and other crimes, as well.

On the night of the NYC truck attack, police went to several locations in Paterson, NJ. Residents of a South Paterson neighborhood reported seeing swarms of law enforcement officials surrounding an apartment complex, a mosque, and local stores. Saipov s apartment building is located on Genessee Avenue in Paterson. According to investigators, Saipov lived in the apartment with his wife and kids.

Paterson, which has a total population of more than 147,000 people, is a popular living spot for Middle Eastern immigrants in NJ. Thousands of people from Palestine, Syria, and Turkey reside in Paterson, along with people who have come to the US from other countries. (Paterson reportedly has more than 52 nationalities among the city s many residents.) While Saipov and his family lived in Paterson, it is believed that they only recently moved to New Jersey.

Contact Criminal Defense Attorney Alissa Hascup for a Free Consultation About Your Case in Paterson, NJ

Alissa Hascup is an experienced criminal defense attorney who represents clients charged with violent crimes, such as murder, manslaughter, and aggravated assault, in Paterson, New Jersey. Attorney Hascup previously worked as an Assistant Prosecutor with the Morris County Prosecutor s Office. Now, she fights on behalf of individuals accused of crimes in Passaic County and elsewhere in NJ. Contact Attorney Hascup today to start your defense.