Paterson, NJ Couple Arrested After They Allegedly Conducted a Drug Deal in the Presence of Their Two-Year-Old Kid 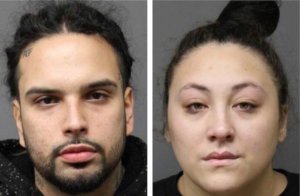 A couple from Paterson, New Jersey was recently arrested and charged with child endangerment after they allegedly attempting to sell cocaine in the presence of their young child. The main suspects are 26-year-old Samuel Irizarry (a rap artist who also goes by the name Fame ) and 26-year-old Jenece Miranda. According to authorities, Irizarry and Miranda have been distributing cocaine throughout Bergen County, NJ. The pair allegedly trafficked the narcotics from Passaic County into various municipalities in Bergen County and then sold the drugs on the street. Law enforcement became aware of the alleged drug activity and launched an investigation in August 2017. Since that time, undercover narcotics detectives have reportedly observed Irizarry selling cocaine on more than one occasion.

Irizarry and his girlfriend, Miranda, were placed under arrest after Passaic County detectives and Bergen County detectives allegedly saw the couple conduct an illegal drug transaction and sell more than one ounce of cocaine in an unspecified town in Bergen County, NJ. A third suspect, 35-year-old Alma Rivera, was also reportedly present at the time of the drug sale. At the time of the alleged narcotics activity, the two-year-old child of Irizarry and Miranda was also allegedly present. As a result, all three suspects in the drug crime case face criminal charges and a possible investigation by the Division of Child Protection & Permanency (DCP&P).

Irizarry, Miranda, and Rivera have all been charged with distribution of cocaine and endangering the welfare of a child. Both charges are classified as second degree felonies, which means that a conviction on just one charge could result in the suspects being sentenced to 5-10 years in New Jersey State Prison. Irizarry may be subject to an even lengthier term of incarceration if convicted because he also faces third degree cocaine distribution charges in connection with an illegal drug transaction at another time.

After being arrested, Irizarry, Miranda, and Rivera were all moved to the Bergen County Jail in Hackensack, New Jersey. The three suspects are being detained in Bergen County because that s where they were arresting. In all likelihood, the suspects will eventually be released from jail and allowed to remain free until their criminal charges are resolved.

Have you been charged with cocaine distribution, marijuana possession, or any other drug offense in Paterson, New Jersey Then it is critical that you speak with an experienced criminal defense attorney about your case. Alissa D. Hasup is an aggressive criminal lawyer who can defend you against serious drug crime charges. Contact Attorney Hascup today.